Single origin coffee. The coffee beans and staff inside the counter will walk you through the world of coffee. Take a look into a new world with a nice conversation. 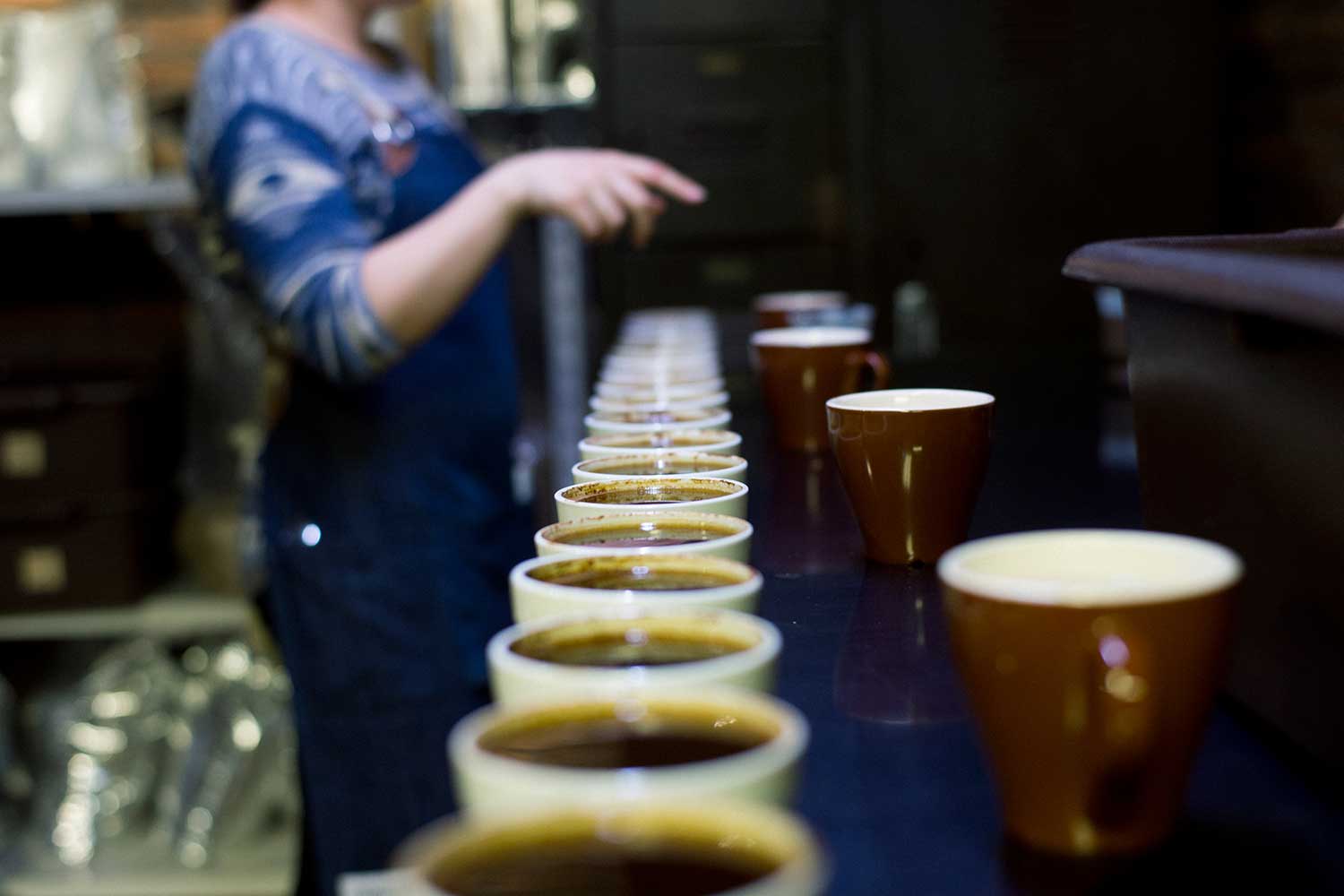 Every encounter can be a chance for something new. As I wrote in the SMOKEHOUSE story even though our initial ideas fell through, my acquaintance with Mr. Nojiro of NOZY COFFEE gave me the chance at a big new project later on.

The biggest change I underwent thanks to our relationship was my discovery of coffee. I had not liked it before -- or at least, I didn’t think I liked it. I am the type of person who hates preconceptions and always tries to upend them. For example, I convinced a person who hated beer to try TY beer and he said “Yes, this is good!” Another time, an acquaintance had a preconceived notion that Sake always gave him a hangover, but I got him to drink in moderation and he enjoyed it. Despite this attitude, I myself had a strong preconceived notion about coffee. I never liked the sourness or the acridity of coffee… although maybe I had been exposed to low-quality or poorly prepared coffee. After cupping with Mr. Nojiro and touring around the U.S. with him, I found myself able to tell what makes a good cup of coffee, and was even able to tell the differences between coffees. Being able to improve something about myself like that made me very happy.

We cooperated in designing THE ROASTERY, and our synergy is reflected throughout the space. Instead of a counter, there is a large island situated across from the entrance. I almost gave up on the idea because I thought it would take up too much space, but thanks to the tenacity of Mr. Nojiro, it got done. And now, it’s the focal point of the restaurant. It serves as a stage for the Baristas, thanks to the 360 degree counter. The design reflects the importance Mr. Nojiro places on how the Barista faces the customer. Since it’s an open layout, the Baristas can easily talk to any customer. This is helpful, because of the shop’s location, the customers may not necessarily be coffee experts. The Baristas may not only have to brew delicious coffee, but also help the customer learn about coffee through conversation and tasting. You can see how having a central island is key to making this work. As for the general design concept, it is called THE ROASTERY, so we wanted it to feel like a place where the real work of coffee-making was being done -- minimalist but energetic and productive. To that end, we cut away anything unnecessary we could, right down to the menu on the wall, so we could focus on warm, personal interactions directly with customers.

This idea and the feeling we’re looking to create in this space will definitely make it a place where countless important meetings between people will take place. I’m also positive that this particular establishment will mark a turning point in the direction of the coffee shop industry. And on a more personal note, this project has turned me from a “coffee-phobic” into a “coffee-phile.” In addition, even though I’ve started a number of restaurants with legendary restaurateur David Chiddo, this project made me realize that it is also important for me to give opportunities to passionate and talented young people with whom I am acquainted in the field. For example, I believe this shop will mark a big turning point in the lives of Mr. Nojiro and his colleagues from NOZY COFFEE. And the Chief Barista, who introduced me to Mr. Nojiro in the first place, began as a part-timer in Daikanyama and has lived a life full of ups and downs. This is the team that made the project a reality, and it is my wish that this new coffee shop, THE ROASTERY, will keep bringing new opportunities and positive change to everyone who walks through the door.

“I want to open a coffee shop on Cat Street someday.” That’s what I told myself six years ago when I was still in college. It was my dream. I’ll never forget wandering up and down Cat Street with a cup of coffee in my hand, looking for an open storefront and people-watching. I was figuring it all out in my head, thinking “The street will change like this if I open the shop here, or over here.” Cat Street is the kind of place that makes me think anyone can express themselves freely without worrying about the rules. It attracts people with character – a place where culture is always being born.

In 2010 I opened the very first NOZY COFFEE in Mishuku. It featured coffee made with single-origin beans and played a part in establishing a new coffee culture. Since Mishuku is not close to a train station, our only customers are those who seek us out. This means that our patrons are a very well informed, discerning group. To cater to them, I’ve maintained the NOZY COFFEE brand by keeping the quality very high, just like our customers expect.

Since we opened, we’ve been lucky enough to get a good amount of media attention. In this way, our coffee shop has gradually gained recognition. It became harder and harder to serve our customers with our roasting equipment, and I was planning on taking the big step of upgrading our shop and purchasing a large roaster. That was when Mr. Shinpei Terada approached me with this project.

I didn’t even hesitate. The timing was perfect, and I was very excited by the idea of creating a new place with T.Y. Express. I would be working with Mr. Shinpei Terada, who I respect and adore. And best of all, the location was going to be on Cat Street, the very location that I had been dreaming of all this time. It was like the dreams I had been having six years before suddenly came to life! Mr. Terada and I toured the West Coast of the U.S, drinking coffee by day and microbrews at night, discussing and refining the concept as we went.

“If we have an amazing space, the highest quality, and a friendly staff interacting happily with our patrons, then our coffee house will be unmatched.” These were the words Mr. Terada left me with as we parted at Haneda Airport on our return. I was able to imagine a fantastic space, born from those simple ideas but supported by deep ideals. The thought of opening such an ideal coffee shop gave me goose bumps.

This coffee culture, nurtured in the past three years in Mishuku, is now becoming popular even more rapidly than I expected. I feel this is the dawn of a new era of popular appreciation for coffee.